By on in Uncategorized 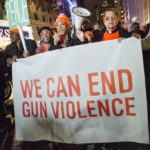 Chi-Raq Orange March
Following the world premiere of Spike Lee’s new film Chi-Raq, which calls attention to the gun violence crisis in Chicago and nationwide, members of the cast, attendees of the premiere and activists will participate in an “Orange March” – a show of support to help #EndGunViolence.
Everytown Against Gun Violence
December 1st, 2015

As you may recall, Act 192 a last minute law signed by Governor Corbett on his way out, would have allowed any person or organization to sue any Pennsylvania municipality that had a gun safety regulation in order to rescind it – and require the municipality to pay court costs. The law caused many small, financially strapped towns to drop their gun safety rules. After suit was brought by Pittsburgh, Philadelphia and others, Act 192 was struck down by the Pennsylvania Supreme Court – because it dealt with more than one subject.

In the spirit of Act 192, we now have SB1330 and HB 2258, which deal with only one subject – allowing legal suit by individuals or organizations to force local municipalities to rescind gun safety laws. The Senate bill has moved quickly. Were it passed, Philadelphia’s open carry rules and more stringent requirements for a license to carry would be gone, as would Pittsburgh’s requirement that owners report lost and stolen guns within 24 hours.

House Bill 2258 would have the same effect as SB 1330. Gun laws do count and if going the right way, they do make us safer. If you are curious, the Law Center to Prevent Gun Violence’s web site gives a national picture.

The Gun Safety committee is asking that, as soon as possible, you call or e-mail both your state senator and state representative regarding these bills. If you live in most of the East End you will find that your Senator and Representative oppose these bills. You can thank them. If you live in certain city wards or near in suburbs, you will find that your Senator or Representative is either a sponsor or supporter of the bills. Let them know what you think.

HB 1010, requiring background checks on long guns sold privately, is still languishing in the House Judiciary Committee. The paragraph above applies. If you are not sure whom to call, please see Joan Gaul.

View all posts by SixthChurch →

We are an open and affirming community of faith in Jesus Christ. At home in an urban neighborhood of many faiths, we acknowledge that we are not alone on the path to understanding God. In worship, study, and fellowship, we celebrate our Presbyterian roots and find joy in our diversity. We strive for the grace to love one another as we seek deeper understanding of life in the Spirit, working for justice and serving as stewards of God's wondrous creation.